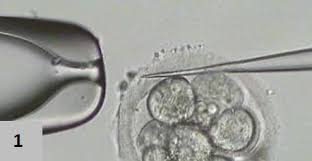 What Is Assisted Hatching?

After an egg is fertilized in the laboratory, the cells begin to divide. During these initial stages of development, the embryo is contained in a layer of proteins known as the zona pellicuda. In order to successfully implant into the uterine lining, an embryo has to hatch out of the zona pellucida and attach to the walls of the uterus.

Assisted hatching is a newer lab technique that was developed when fertility experts observed that embryos with a thin zona pellucida had a higher rate of implantation during IVF. With assisted hatching, an embryologist uses micromanipulation under a microscope to create a small hole in the zona pellucida. This happens on the fourth day of embryo development when the embryos contain an average of six to eight cells.

The embryos are stabilized by a holding pipette, and on the opposite side a small pipette containing an acidified solution creates a small defect in the zona pellucida. The embryos are then rinsed to remove any excess acid solution and returned to the incubator for a few hours before transfer into the uterus.

Who Should Use Assisted Hatching with IVF?

Assisted hatching is thought to be helpful for couples with a poor prognosis whose embryos are thought to lack sufficient energy to complete the hatching process.

According to the American Society for Reproductive Medicine, assisted hatching may be indicated for women with: