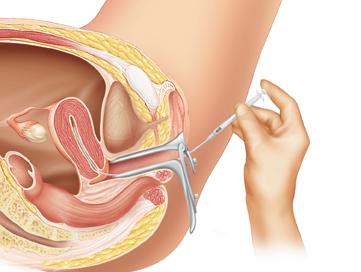 Intrauterine insemination (IUI) is a procedure designed to place sperm directly into a woman's uterus through artificial means. The sperm is prepared for this procedure in the laboratory and then deposited inside the endometrial cavity using a small catheter passed through the endocervical canal.

IUI is recommended for patients:

IUI can be performed during a natural ovulation cycle, or with ovulation induction with clomiphene citrate (Clomid®) and human menopause gonadotropins. In general, after the administration of the ovulation induction medication, the follicular development is monitored by pelvic ultrasound and by estradiol and LH determination in blood.

Once the time of ovulation is predicted, a semen sample will be produced by the partner in the andrology lab. The semen is processed through the special technique known as sperm wash, which consists of incubation and separation of the sperm to obtain the best quality sperm. The final sample will be placed inside the endometrial cavity using a catheter specially designed for IUI.